And so the highways and byways beckoned once more. Our final US road trip was about to commence with the sole purpose of arriving in San Francisco in time to catch pre-booked flights to Mexico.

We gave ourselves a healthy 12 days to complete the trip from Portland and headed south, first to the town of Willamina, also known as Timber Town USA.
We stayed at what seemed to be the only hotel in town, The Wildwood Hotel. We dined at their adjoining restaurant, and another in town called Coyote Joe’s; both pretty good. The hotel had no other guests so we had the place to ourselves, which seemed a bit eery. Occasional freight trains and trucks loaded with timber cruised past breaking the silence, heading for various destinations around the country.

A friendly little place, off the beaten track, we only stayed for one night before continuing south. Our next destination, Grants Pass.
Grants Pass was a cracking place. Full of unique shops and eateries, some beautiful scenery, including Rogue River – famous for its rafting. 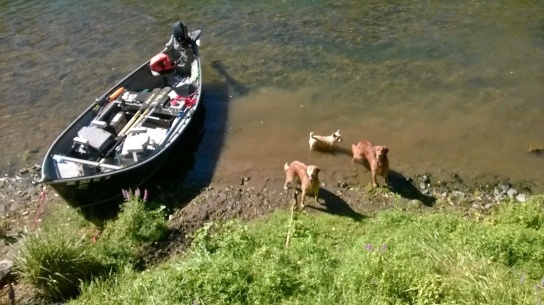 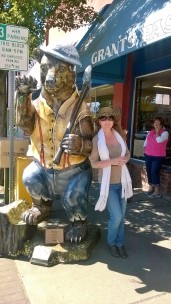 Again just a one night stay, we lodged in a family home situated by the river on the edge of town. Hamish loved his brief stay, blissfully playing with our hosts two Golden Retrievers, whilst we sneaked out for supper to the popular Taprock Northwest Grill – later enjoying the jacuzzi and hot-tub on our balcony with a beer or two. Our morning breakfast of homemade pancakes and fruit went down a treat before checking out and spending a little time downtown.

Definitely a place to visit for a few days. Unfortunately our hosts were booked up for Labor Day so we made for the nearby town of Cave Junction. It would be our last Oregon stop before crossing the State line into California.

Cave Junction with a population of less than 2000 is so named due to its location at the junction of Redwood Highway just a few miles from the Oregon Caves. Originally a gold mining town before timber took over as the main source of income.
Now dependent on tourism, Cave Junction has a sprinkling of shops, bars and diners, the best being Taylor’s Sausage where we stopped for lunch. We moseyed around town before taking a scenic drive up to the caves through a steep and narrow winding mountain road, before heading back to our log cabin. The cave tours were fully booked but the drive alone was worth the trip. 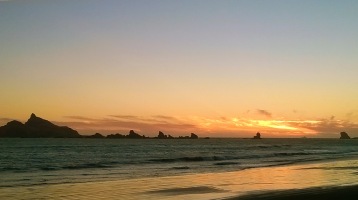 In the morning we’d make for California and a place called Crescent City.
Our fourth single night stay in a row we arrived late to, and would depart early due to a long drive the next day to Santa Rosa.

Crescent City sits between the Pacific coast and the giant Redwood forest and we arrived just in time to head to the (crescent shaped) beach to watch the sun turn the sky deep orange as it sunk below the horizon. Due to its geographical location the city is susceptible to tidal waves or tsunamis. Much of the city was destroyed in the early 1960’s and as recently as 2011 suffered extensive damage to the harbour area.
Our accommodation was a single room in an old cottage, owned by a retired lady called Patree, eclectically decorated with unusual ornaments and bric-a-brac.

Upon our arrival, we were greeted at the front door and treated to beer (for me) and delicious homemade sourdough pizza. A rare treat after arriving so late in the evening.
Although our room was small for two adults and one dog, with that kind of hospitality it could’ve been easy to stay longer.

After a hearty breakfast the drive to Santa Rosa would prove to be a long one. We made several stops along the way, visiting various sections of the Redwood National Forests. Redwoods grow better near the ocean, taking in the moisture from the air and fog rolling in from the sea, thus continuing to grow during times of drought.
The stunning ancient trees, a true wonder of nature, towered above us like earth’s own skyscrapers. We seen one so big it had been made into a house. Others were hollowed out and made into single rooms by early settlers. The old window holes once cut through, now covered by bark as they continue to flourish and repair themselves from the vandalism caused by humans.
We drove through sections of the road so narrow you had to squeeze and snake past the awesome monuments at crawling speeds of 15mph. We found a trail that allowed Hamish off the leash and hiked for about an hour, staring in wonderment at the sheer size of what is basically a woody plant, before hitting the road once more.
As we neared Santa Rosa, the landscape changed and vineyards took over from trees and hills, the air ripe and filled with the fruity aroma of grape. It wouldn’t be long before we sampled some wine.

We didn’t see much of the city of Santa Rosa, preferring to relax after the whistle stop destinations of the previous four days. Dining at Sweet T’s restaurant, we sampled some Californian wine and enjoyed a Martini cocktail for dessert. All very good, and after a couple of chilled out days at our basement apartment we made for Ben Lomond, just south of San Francisco and a short drive from Santa Cruz.

Originally named Pacific Mills, this small, former logging community became Ben Lomond in 1887 taking the name of the nearby mountain, christened by Scottish settler John Burns after the ‘Munro’ in Scotland. The town’s reservoir is called Loch Lomond and a neighbouring community, Bonny Doon, keeping the Scottish theme.
We stayed here for 3 nights plus a further night in Scott’s Valley close by, before driving to San Francisco for our flight the following morning.

The accommodation was a private room in a large community house, which may be described as a kind of ‘new age settlement’ promoting health and spiritual healing.
Very welcoming, we ate with our hosts, who also showed us round the nearby Roaring Camp and Big Trees Railroad park, again witnessing some of the best redwoods in the area.
As part of our stay we were given the opportunity to sleep in the Sensory Deprivation Tank, which we did on alternative nights. A large tank filled with water and Epsom salts, you float enclosed inside in total darkness for up to twelve hours (less if you wished).
Flotation tanks are said to help with aches and pains, inflammation, stress, fatigue and jet lag, and are becoming more popular in Spas and Hydrotherapy clinics.
A little strange at first, it took me while to adjust to floating in a light-less ‘room’ devoid of sound or gravity (music could be piped in if you wish). Preferring total silence, I soon drifted away and maybe slept for about six of the eight hours that I remained inside, before succumbing to a traditional bed and a cosy duvet. A totally different experience and, if asked if I’d do it again, the answer would probably be yes.
During our final evening, we were invited to a traditional North American Sweat Lodge, or purification ceremony giving thanks and prayers to the spirit world in the form of chanting, song and prayer – climaxing with the passing round of the ‘peace pipe’. Other than a sauna experience it wasn’t really my thing, but nevertheless we completed he two hour ceremony giving as much respect as any other religious ritual would demand.

For Hamish, Ben Lomond offered some good walks in the local hills, though we were warned not to loose sight of him at night due to coyotes and mountain lions, of which some local pets had fallen prey.

With our impending trip out of the US getting closer, all that was left was a visit to the vets to garnish his exit/entry paperwork and update his vaccinations. We did this by visiting the Mountain Animal Hospital in Ben Lomond, situated inside an old bus, which was situated inside a shop. Despite the unorthodox surroundings the vet gave us the required documentation with the minimum of fuss. All that was now required was the safe passage to our airport hotel in San Francisco and the monotonous flight check-in process. Mexico was calling again….