The small city of Puerto Escondido, population around 45,000, didn’t exist before 1930 and was mainly used as a Port for shipping coffee.

Situated about 200 miles south of Acapulco and aptly named “Hidden Port” in Spanish it’s relatively unknown outside Mexico and is still by and large an authentic Mexican town. Located away from the tourist centres further north, it serves mainly US or Canadian citizens looking for a quieter holiday vacation, or younger surfers looking to hit the giant waves the Pacific Coast enjoys in abundance; two international surfing competitions are held here at the Zicotela beach in August and November.
We arrived after a 45 minute flight from Oaxaca via a local airline and were met by business owner Gisela, our Airbnb host during the first Seven nights of our three week stay. 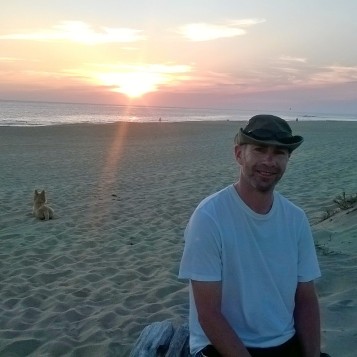 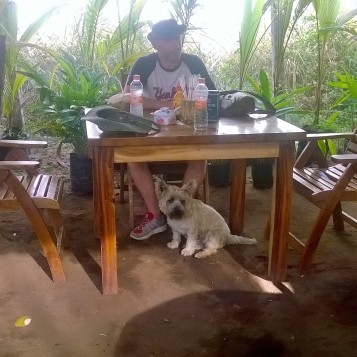 Situated on the outskirts of town, just five minutes from the airport and nestled within a small community of restaurants, holiday rentals and a few shops, it was the perfect location. Only 15 minutes walk from a large two mile stretch of almost secluded beach we’d walk Hamish every day, usually late afternoon when the day was cooling off. Although dogs were supposed to be on a leash, the Lifeguards and Police didn’t seen to mind and gave Hamish free reign to run and splash about till his heart’s content. This section of beach, although beautiful, was largely ignored by not being suitable for swimming or surfing due to the size, ferocity and unpredictability of the waves as they crashed ashore, though you could still do a little bit of paddling in some sections; its quietness the reason we liked it more than the others. 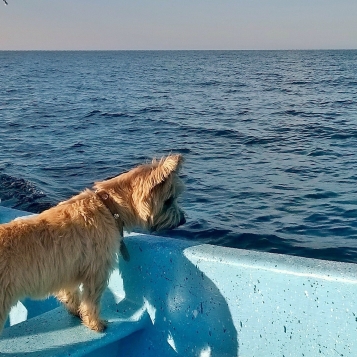 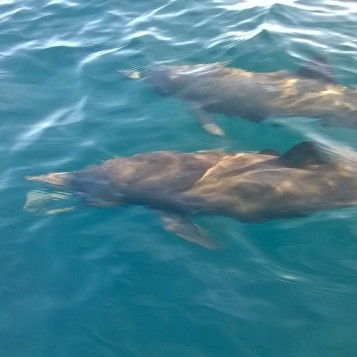 Most days for breakfast we visited El Sultan, a Middle Eastern restaurant serving hummus, falafel and various local delicacies including pita bread filled with goats milk candy, all washed down with your pick of fresh fruit juices [or beer]; Or a local cafeteria called Cafe-Choc serving traditional Mexican breakfasts, local coffee and hot chocolate. Evening meals, our favourites we chose either French or Italian – both delicious.
A few boat owners ran various tours and one morning after an early start with the sunrise we went dolphin spotting; Hamish finding his sea legs with relative ease, though he wasn’t sure what to make of the dolphins as they darted past the boat and playfully jumped several feet out of the ocean much to our delight. The tours last typically two to four hours and can include a spot of fishing. We were happy just seeing the wildlife and although missing out on seeing Whales we did catch glimpses of Marlin, Sting Ray and Turtles.
After a week we moved a few hundred yards to the Hotel Villa Mozart, a small hotel apartment with a balcony looking onto a garden area. This hotel doesn’t normally permit pets but Hamish seemed to win over the owner, Gunner, who happily allowed him in. 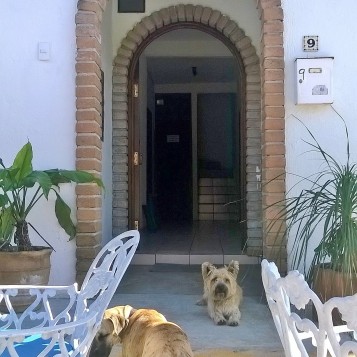 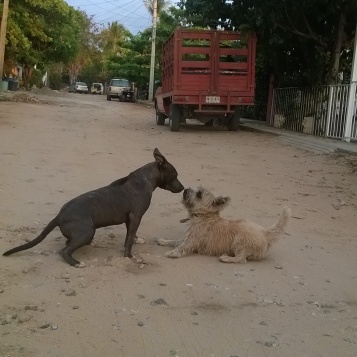 Whilst here we blithely spent our time relaxing, going to the beach and occasionally walking the ten minutes into town to the ATM for more cash, plus doing a bit of browsing around the local stores and street stalls. A few minutes away by taxi a large local market awaits plus a few other beaches, more suitable for swimming and surfing than our quiet secluded one. 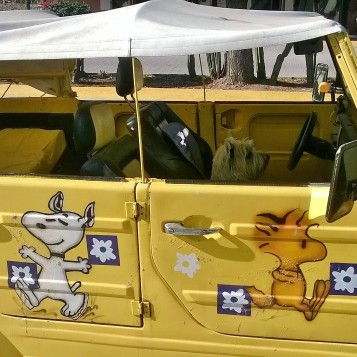 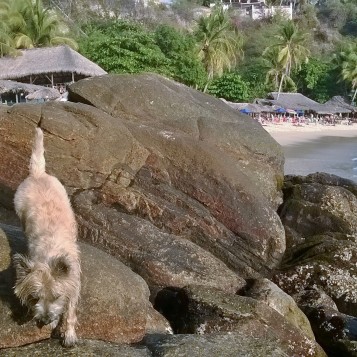 No escape from the haircut….

A good town for Hamish after the restrictions of Oaxaca, having as much freedom to roam as he wished. The street dogs [Chuchos] happily gave their approval to the new kid in town and Hamish joined in with their play as much as we allowed, safe in the knowledge that those dogs are largely free from illness due to the generosity of the restaurant owners who club together to pay for treatments and vaccines.
It was also time for him to receive his third haircut since the start of our travels and the local vet picked him up and dropped him off, much lighter but a lot cooler without his thick Scottish coat to slow him down.
Our three weeks passed in a flash and after initially planning a journey to Guatemala via Mexico City, we chose instead to move further down the coast to a small village called San Agustinillo, an hour’s drive away.