Guatemala. The land of trees and forest.
A short hop, skip and jump over Mexico’s southern border took us to Central America’s most populated country; first to the capital, Guatemala City, before a short ride to the former capital, Antigua, for a fantastic few days exploring and enjoying the country’s indigenous arts, culture and hospitality.

Around the size of Tennessee, Guatemala has a population of approximately 16 million people, has 23 indigenous languages with bustling towns and cities full of Spanish architecture from its colonial past. The countryside is mainly mountainous terrain and thick jungle boasting over 30 volcanoes. Archaeological ruins from Mayan history dot the landscape; exotic plants, birds and animals congregate around lakes and lagoons which lie within a country that borders Mexico, Belize, El Salvador and Honduras and stretches from the Pacific Ocean to the Caribbean Sea.

After spending six months in the Mexican city of Puerto Vallarta, we decided to renew our visa by venturing south on a quick ‘border run’ choosing to go here rather than north to the US for a similar length of time. Researching flights through Skyscanner.Com we found Guatemala to be the quickest and most cost-effective. Other options included Cuba or Panama, which we ruled out due to travel times and delays between connecting flights.

Our trip would be short (less than a week) so we arranged to leave Hamish in the safe hands of a neighbour who runs a dog sitting business. And with that we set off to the airport on a journey that would see us stop over in Mexico City for a few hours before making the final leg to Guatemala City with our arrival due around 11pm. Of course, our flight was late and it was closer to midnight before we touched down.

The late arrival time was not ideal. Foreign Office advises against late travel, noting that kidnapping and robberies can be frequent during these times. Indeed, if you believed that advice, it would seem that Guatemala is not for the faint hearted….. Still, we set off looking forward to a new adventure believing the advice to be slightly exaggerated.

With no dog in tow we travelled light, packing the minimum of a few essentials and enough cash to last us throughout our trip, and a little to spare. As we were arriving late we booked a hotel close to the airport. Included in the deal was a free pick-up service. Unfortunately the free pick-up was only until 11pm. As our flight was delayed, a taxi it had to be.

The Hotel Dos Lunas was a small comfortable family run business and was a perfect place to crash after a long day of travelling. We were met at the hotel by the owner, Henk, a Dutch national now living in Guatemala. Henk spoke fluent English and apart from being an excellent host his knowledge of the local area was invaluable. Other than the free pick-up (until 11pm) you could pre-order snacks and drinks delivered upon your arrival. This would save us trying to find somewhere so late in the evening. Happy to have arrived safely we settled in for the night. In the morning we’d embark en-route to Antigua via shuttle bus at $10 USD per person.

The shuttle bus was bang on time just after breakfast and we were the first of seven passengers to be picked up; the others at various hotels and hostels around the city. This would give us a little tour of the capital as the driver recklessly darted around town, throwing us energetically from side to side as he tried to make each stop on time.

As we drove around there didn’t seem to be many redeemable features in Guatemala City. It looked run down, tired and in need of investment. It didn’t instill confidence with the observance of armed guards standing shotgun at many businesses and shops and we were happy to have made the decision to make for Antigua where a more relaxed atmosphere would welcome us.

Normally the journey would take around 40 minutes but heavy traffic saw our travel time jump to well over an hour. The driver was also unable to locate our hotel so we made the decision to find it ourselves with the help of a local tuk tuk (who also couldn’t find it). After driving round in circles for a spell we made for the first hotel we could see and used their WiFi to contact our hosts who directed us to a mere five minute walk from where we were first dropped off. No matter, we arrived to a luxurious colonial home just a fifteen minutes by foot from Central Park in the heart of the city.
Our hotel, Casa Mamalba, was a brilliant place to stay and was the epitome of relaxation in the heart of the city. A large breakfast awaited us each morning and in the evening we relaxed by the log fire (nights can be a little colder here).

Antigua is a small city of about 45,000 inhabitants. A UNESCO World Heritage Site, the city is famous for some well preserved architecture and ruined colonial churches making it a photographers dream. Surrounded by volcanoes it has a friendly indigenous feel and a blossoming tourist industry based mainly around backpackers looking to explore the lush countryside, jungle, lakes and volcanoes. 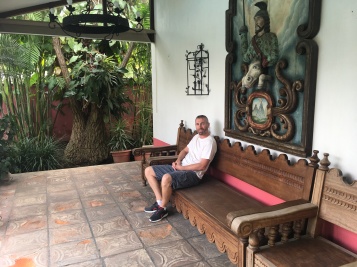 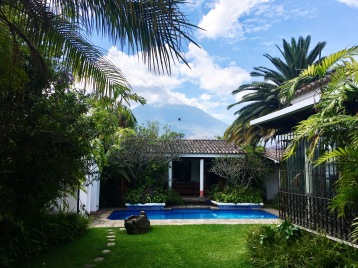 We found some delightful culinary offerings of French, Italian and Indian cuisine which seemed to outnumber typical Guatemalan food. A couple of unique bars and a book shop that offered free beer with any purchase also tickled our fancy. The Choco Museo passed a little time as did wandering around the local food and clothing markets with our hosts who kindly drove us the short distance to town. The city centre was full of Mayan street traders selling handmade crafts and the parks were a fine place to sit and relax with food stalls offering locally cooked snacks at a fraction of the price in restaurants.
A great city to visit and the perfect base to explore the highly recommended Lake Atitlan and the wonderful surrounding villages – which we plan to do in the near future. 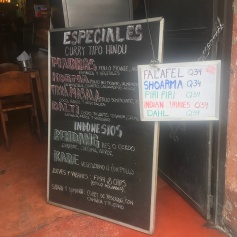 Our last night saw us make a return to Hotel Dos Lunas for an early check-out and a 06:45am return flight to Mexico City. The short journey to Guatemala City didn’t quite go to plan when the shuttle bus failed to show but the hotel found us a taxi after a short wait and off we went waving Antigua a fond farewell.
Our morning flight to Mexico left on time and we were back in Puerto Vallarta by 5pm with immigration stamping our passports for another 6 months. We picked Hamish up from the dog sitter and look forward to exploring Mexico for a little longer.